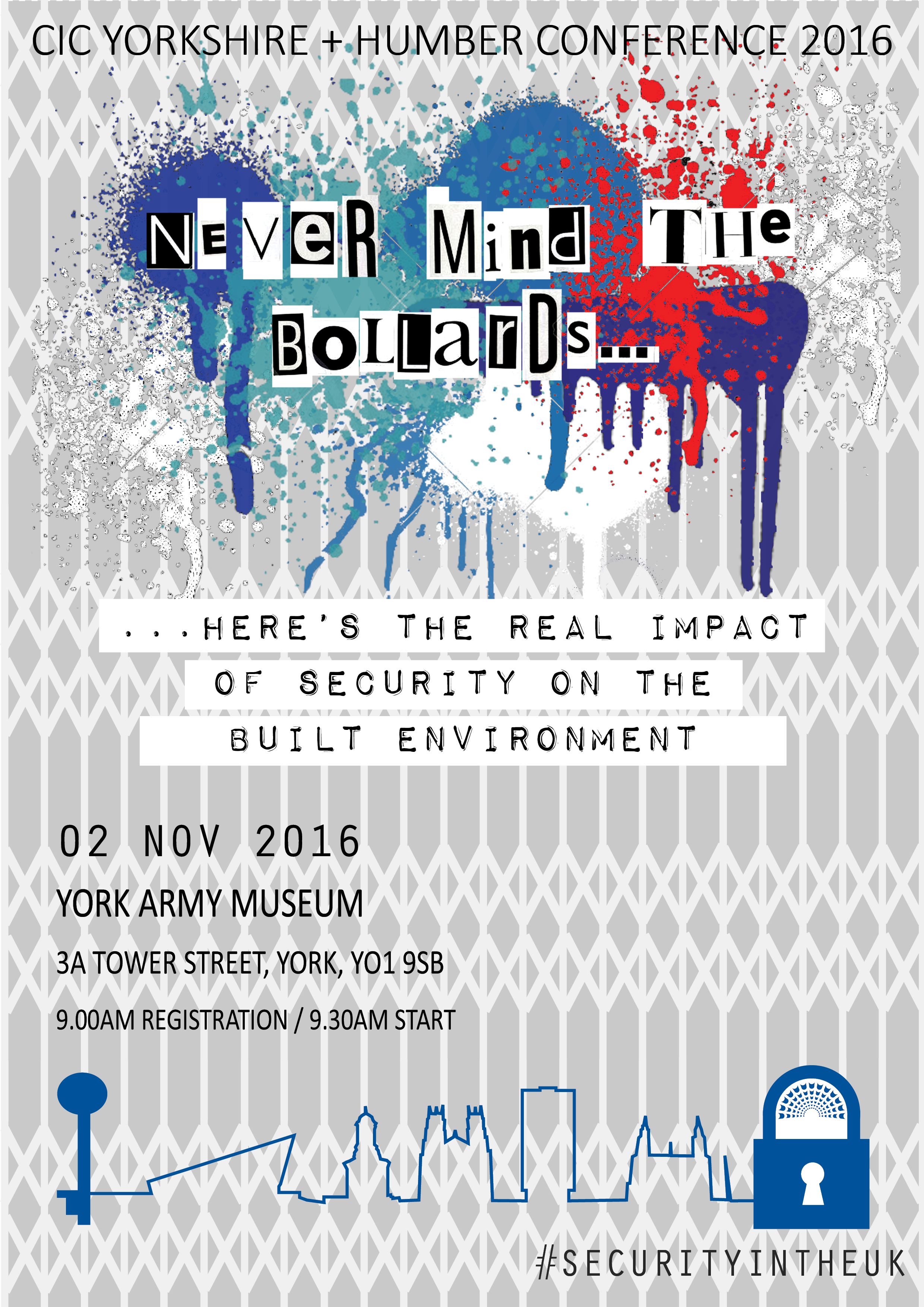 The aim of this day is to explore the ways in which our built environment has developed and continues to develop strategies that respond to safety and security risks, and how we, as construction professionals, can work together to create safe yet welcoming spaces. What this conference is not about is bomb blast bollards and barriers, but rather an interrogation of new threats, what we can learn from past threats and what we can do to defend the future.

Please register your attendance via eventbrite at the link below

And we are not just referring to the impact of contemporary terrorism on our built environment – it is also about safety.  Creating places that feel safe at all times of the day is crucial to the success of a neighbourhood, resulting in reduced crime and increased business.  It can attract investment, people and culture.  Indeed a little anarchy can be a good thing for an area, cultivating alternative thinking, artistic endeavours and literary inspiration.  A counter-culture can be good for business – just look at New York’s Meat Packing district or Brixton.  Unfortunately safe places = terrorist targets.  Boston, for example, is consistently voted as being one of the safest cities in the US, although this illusion was shattered during the Boston Marathon, giving rise to the question as to whether a balance can be struck between ‘safety’ and ‘security’.  It would seem this shift in the balance is only temporary.  Cities are amazingly resilient – largely due to its people who rebelliously will not hide, but also the buildings, infrastructure and public spaces that continue to endure.

Many of our cities developed because of their defensive position.  Whether a small city like York or a metropolis like London, the very existence of these conurbations is due to their foundations as fortifications.  The quaintness of Yorkshire market towns like Richmond or Knaresborough belive the once strategic importance of their associated castles, but these fortifications influenced how our cities developed and in turn shaped our society, becoming places of safety in turbulent times.  How things have changed.  From the blitz, the threat of nuclear war and alternative tactics from terrorist organisations have made these urban areas look less like refuges and more like targets.  How has modern day urban planning responded to these new challenges and is there a way that we can learn from past defensive design to bring sanctuary back to the city?

There is a great deal of research on how the creation of spaces that give residents and users a feeling of sanctuary, reducing crime and anti-social behaviour.  However it would seem that this theory is taken to the extreme; that rather than creating urban design that engages people,  some local authorities and developers are keen to ‘design out’ certain activities, and ipso facto, certain people.  Whether it is the anti-loitering “Mosquito” device, anti-skateboarding studs or benches that prevent any other use other than the act of sitting, urban spaces are becoming less about inclusive design and more about defending our cities from the homeless, ‘anti-social’ youths and feral pigeons.    What are the consequences of such design?  How can we design urban spaces that are all embracing to the wider society in which we live, yet remain safe and welcoming?

Is the Internet of Things possibly the future of the industry, and the development of the concept of intelligent buildings is leading to significant shifts in the way buildings are designed, operated and used.  From the designers, constructors and users, everyone stands to benefit from the optimisation of space, energy efficiency and connectivity, whether a workplace or home, changing demographics come with increasing user expectations of modern and flexible space design, improved comfort, productivity, and pervasive connectivity.  Sounds great, but the downside is that the greater the reliance on digital technology, the greater the chance of the building – or elements of – being hacked.  Can terrorists turn out the lights out of a city, can a burglar hack into your security alarm, can your kettle turn against you?  Is this the future or will there be a revolution against the digital age?

Maybe the armed forces can help solve some of the challenges.  The armed forces have incredible skills in design and engineering; skills used to overcome some extraordinary circumstances in places of extreme danger.  These skills, developed in response to defending security, can be used to overcome peacetime problems.  Whether in the aftermath of earthquakes or, as the Boxing Day floods demonstrated, the army’s skills in design were indispensable in keeping communities together and society functioning.  However, can these skills be used for more than emergency situations, when all other options have failed?  Are there innovative solutions that the industry can use as a matter of course?

I realise that I have introduced more questions than answers, but that, I think, is because there is no single answer in creating safe and welcoming spaces.   Indeed it is questioning what has been done and how we can work together in the future that is the basis of the Construction Industry Council’s sixth annual Yorkshire & Humber conference.

The aim of this day is to explore the ways in which our built environment has developed and continues to develop strategies that respond to safety and security risks, and questions how we, as construction professionals, can work together to create safe yet welcoming spaces.  What this conference is not about is bomb blast bollards, barriers and anti-parking paving, but rather an interrogation of new threats, what we can learn from past threats and what we can do to defend the future.

For further information on the conference please click here.

Constructing Excellence Yorkshire and Humber (CEYH) are supporting Construction Housing Yorkshire with their supply chain school event on Thursday 12th October (8:30 to 18:00) at the Park Plaza Hotel in Leeds

CHY are working with Supply Chain School to host a supplier day with a difference.  On the day we’ll hear from main contractors operating within our region including BAM, Balfour Beatty, Bardsley Construction, Carillion, ISG, Kier Laing O’Rourke, Morgan Sindall, Wilmott Dixon and Wates.  CHY will present a transparent matrix outlining what is required and expected from each main contractor supply chains and, more importantly, what support is available from CHY, the Supply Chain School, the contractors and local partners to support your business realise its potential.

There is a real desire for main contractors to open their supply chains driven by the social agenda.  The event is only open to those currently outside of main contractors supply chains.  At CHY we want to make a local difference to construction employment, skills and SME engagement; and we want you to be part of it.

Visit our stand in the exhibition area to find out more about what we do and how we support businesses in the region to deliver on their potential.

***PLEASE NOTE DUE TO UNFORESEEN CIRCUMSTANCES WE HAVE HAD TO CANCEL THIS SEMINAR AND WILL REARRANGE. IF YOU WISH TO BE NOTIFIED OF THE NEW DATE PLEASE EMAIL ckeevents@leedsbeckett.ac.uk***

Constructing Excellence breakfasts are back! And we will be kicking off our new ‘term’ of breakfast seminars with Addleshaw Goddard LLP construction team who will be talking about their Managing Risk Service and the difference careful risk management can make to project delivery. They will also be providing practical tips on dispute avoidance and the opportunity to hear about two real case studies.

Whilst not all disputes can be avoided, a proactive approach to risk management helps to avoid disputes and reduce the risk and complexity of formal disputes if they do arise, saving both time and cost and proving that prevention really is better than cure.

To get involved join us at

(If you are using a satellite navigation, please use the following postcode: LS1 4BJ)