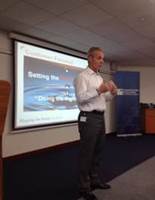 Over 50 construction professionals including contractors, lawyers , architects, engineers and lecturers filled the seminar room at Addleshaw Goddard LLP in Leeds on Wednesday morning for a Constructing Excellence Breakfast event on CDM Regulations. CEYH is a network for the Yorkshire and Humber construction industry, committed to providing a programme of events that respond to the needs of industry, its customers and the government to make change happen and to deliver real useful informative events.

This event lead by Clive Johnson from Land Ssecuritiesdid not disappoint with some golden nuggets of information released relating to the forthcoming change to CDM regulations due to take place in 2015.

Clive Johnson (Land Securities ) drew on  real life practical case study evidence of Health and Safety responsibilities and the implications that the CDM  changes will have on construction  industry current practice.

Jim Barron (Faithful&Gould) provided the CDMc consultant perspective – delving into the issues raised within the consultation and focusing delegates attention around areas of ambiguity within the forthcoming changes.

Clive kick started the event with a strong client message of ‘ make it healthier , safer, happier and good for all ‘ pointing out the main points that  the  HSE’s evaluation process of the CDM 2007 had identified to be taken forwards including the replacement of the CDM Coordinator with the new role of ‘principal designer ‘ As chair of the CONIAC CDM working group Clive has been involved in the preparation of the guidance for one off infrequent clients which have been been signed off and submitted to the HSE , indicating these will be released in in April 2015.  Clive stressed that the role of principal designer will not be a role many architects will be keen to take on due to the nature of the role and existing skills gaps within architectural practices . Another change impacting on us all is the extension of Client health and safety responsibilities to domestic clients – if you are getting an extension built ‘do it now ‘ joked Clive .

Clive stressed the importance of  ‘Health’ as a key focal area for the industry stressing that the new principal designer role must ‘design out’ health issues too.  Clive questioned whether professionals felt comfortable with difference in definitions of health , wellbeing and ocupational health.

Clive ended his presentation on a positive note reminding us that leadership, co-ordination and communication is important but teamwork and working together is vital!

Jim began by stating it’s really important to understand the role of the CDM co-ordinator as a person facilitating communication between a cross section of disciplines and able to identify and assess risks from an impartial standpoint .  Jim pointed out that the HSE policy objectives are aimed at small construction sites and the need to tie into the EU directive.  The CDM co-ordinator role will be replaced by a principal designer .  Jim confimed there are concerns if SME’s will understand and engage with the new regulations and guidance.

A lively Q & A session followed.   Comments and observations from the audience included:-